Somali state media said that the two discussed a wide range of topics that includes security and finances.

“During the meeting, discussions revolved around the strategic Somali-Russian partnership relations and ways to strengthen and develop them in various economic, social, political, military and security fields for the benefit of the two friendly peoples and countries.”
Somalia committed a diplomatic blunder during the meeting by accidentally displaying the Netherlands flag. Both flags are horizontal tri-colour flags with the same proportions but arranged differently and slightly different shades of their respective colours.

The Russian ambassador comes as Somalia is facing stiff opposition from her historical international partners. Somalia’s Lower House of Parliament extended its term and the President’s term on Monday for two years after consultative electoral talks with regional leaders collapsed. Despite the legislation being rejected by Somalia’s Senate, the embattled President signed the act into law. Farmajo’s government was emphatically criticized by the US, EU, and the UK, which threatened to reassess their bilateral relationship and consider sanctioning specific individuals.

The visit could be viewed as the federal government doubling down its decision to extend its mandate and show its Western allies that it could also look East and forge new relationships. 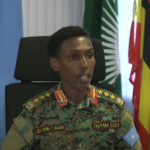