.Macron has previously worked with Saudi leaders to cooperate on solving the economic crisis in Lebanon.

He visited the Kingdom as part of a Gulf tour in December, becoming the first major Western leader to do so since 2018.

Macron beat rival Marine Le Pen by a comfortable margin on Sunday, avoiding what would have been a massive shake-up of the political establishment if his far-right opponent had won.

The centrist Macron won with around 57 percent of the vote, initial tallies showed.

In his victory speech he acknowledged that many had simply voted for him to keep the far-right out of power.

“Many in this country voted for me not because they support my ideas but to keep out those of the far-right. I want to thank them and know I owe them a debt in the years to come,” he said.

“No one in France will be left by the wayside,” he said in a message that had already been spread by senior ministers doing the rounds on French TV stations.

Two years of disruption from the pandemic and surging energy prices exacerbated by the Ukraine war catapulted economic issues to the fore of the campaign. The rising cost of living has become an increasing strain for the poorest in the country. 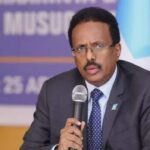 Six dead in Netherlands as truck crashes into community barbecue